The deep web: the dark side of the Internet. A journey beyond the boundaries of the Net

The deep web: the dark side of the Internet. A journey beyond the boundaries of the Net

Deep web speaks of websites of rebels and anti-government political activists, illegal marketplaces where you can buy everything from drugs to weapons to false documents all the way to human organs, hackers and paedophiles. In short, a long blacklist of websites enough to make even the most jaded of us uneasy. This is the deep web, a no man's land beyond detection, where everything illicit is possible. Entering the deep web is like putting on a wetsuit and plunging into the icy, dark waters of the sea, sinking into the depths with just a small torch to illuminate this dark and unwholesome world. The waters of the deep web are always murky and turbulent and to navigate them you need to have a strong stomach and not suffer from seasickness. It is a huge, hidden world far from the reassuring confines of Google, YouTube, Facebook and Wikipedia. A universe without rules or laws, with unknown boundaries and a thousand dangers. Yes, surfing the deep web is no joke. It is like watching a horror movie on television. It poses real risks, and for this reason we warn you to never try to get into it. Familyandmedia decided to go beyond this boundary, to pass the Pillars of Hercules of the Web, to do a story, explore and expose what really lies on the dark side of the Net.

What is the deep web?

The best way to imagine the deep web is to picture a huge iceberg. On the surface, the small tip of the iceberg is the lawful, familiar part we surf every day, subject to rules and national and international protocol standards. But beneath the water is the thickest part of the iceberg not visible on the surface. This submerged part corresponds with the deep web, that is, the Internet that is hidden and not accessible via normal search engines like Google, Bing and Yahoo. In other words, the deep web is a network parallel to the Internet we all know, but much larger. To give you an idea of ​​its extent, just consider that Google indexes about 2 billion documents for the 'normal' network. In the deep web, according to research conducted by Bright Planet in 2000, there are around 550 billion. At times, the dark web is also spoken of, to indicate the most hidden, murky segment of this universe, where navigation is done in complete anonymity and illegal activities reign supreme. The currency is Bitcoin, a virtual and very fluctuating currency which can be used to buy anything. To navigate and move around, search engines are not used, instead users rely on the lists of links sorted by categories or search for advice on user forums. But often, just to protect their safety and anonymity, the pages change their address, almost like fugitives and their hideouts. The deep web is thus essentially a part of the hidden web, a free zone that defies law and any form of control. To get in, special software is needed. To prevent temptation we won’t explain how it is accessed, but we will try to tell you what you can find to give you an idea of ​​its reality.

What is hidden in the deep web?

Not everything in the deep web is illegal, of course. You can also find regular archives and documents, such as medical, scientific, academic or financial that, for technical or other reasons, are undetectable by normal search engines. However, the fact that it is possible to sail in complete anonymity, outside the control of police forces and governments, makes it possible for illicit activities of various kinds to flourish. Content banned from popular search engines such as illegal child pornography sites, trade and production of illegal drugs and weapons, subjected to government censorship sites, find fertile ground to grow and thrive. For example, here are some of the astonishing sites that we have found: 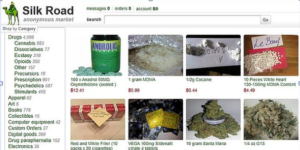 Sites with illegal drugs for sale 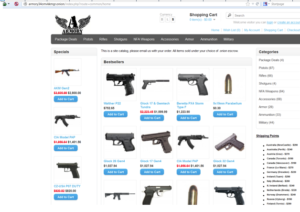 Sites with weapons for sale 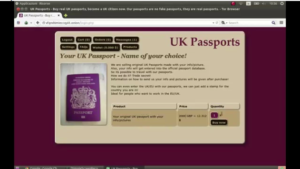 Sites with false documents for sale

Risks and dangers of the deep web

The deep web is primarily a virtual space to act in anonymity. And it is this aspect that makes it so frightening and dangerous, as it is rich ground where paedophiles, fraudsters, hackers, terrorists and people with all kinds of unsavoury intentions can proliferate. My personal impression is that most of the deep web sites are a scam or a platform for the gullible and slackers. After all, who would really buy a gun from 1,000 bitcoins and then wait for it to be couriered to their home address, as if it were an ordinary parcel post? And who would buy drugs and then go and collect them from a secret location revealed by an anonymous dealer? However, it is a different story with regard to the exchange of sensitive information, such as between terrorists, or child pornography. Here, unfortunately, this kind of business is actually possible and practiced. We immersed ourselves into this obscure part of the Internet because the best defence against something dangerous is to know about it. But our warning must be firmly repeated – to not attempt in any way to access this world. Amongst the possible consequences could be the theft of data and personal files stored in your PC. Or you could find child pornography uploaded onto your computer without your knowledge or have your bank account emptied following the first online connection. It is better not to open the door to the deep web, and leave it be where it is in the depth of its dark abyss.     Salva

Women and social media: Does Facebook influence perceptions of the female body?

The 10 Best Children’s Apps on iPad and iPhone

Maleficent: The Story of Motherhood that Redeems